Featured Author: Paul Lubaczewski is a bit of a jack of all trades, or as he likes to put it “keep it interesting”. Caver, photographer, Scadian, brewmaster, musician with the late 80’s early 90’s punk band The Repressed, music critic for Spark-Plug Magazine and New Wave Chicken, DJ, as long as it’s interesting. Originally from Philadelphia Pennsylvania, he’s lived all over the United States, finally settling in the mountains of Appalachia for the peace,and adventure they provide. He loves his wife Leslie, and his three children two adult girls and a teenage boy, and with the boy about it’s a wonder he gets any writing done at all. https://www.facebook.com/lubaczewskiearlsonrevpaul/

Paul Lubaczewski: It seems like all my life really. Just different things during different time periods. I was involved in music, so I wrote lyrics and poetry mainly for the longest time. That fed into doing record reviews for Spark-Plug Magazine and a few other venues. About four years ago I decided I had both enough life experience, and enough patience to consider fiction again. When I was younger, once I knew how a story ended in my head, my interest in writing it died out. A song, well the bare bones of it, you can have the lyrics written in fifteen minutes, much more immediate gratification. Fiction takes more patience. Back to top >>>

Paul Lubaczewski: Horror is first and foremost. It’s generally where I go first when I want to watch a movie too. I was the nerd in Junior High School who had taken out all of the big tabletop books on Horror Movies from the school library. I write in others, but it’s where I go first in my head.
Back to top >>>

Paul Lubaczewski: That’s kind of a two-part question. There’s what inspired the genre I write in usually, and then there’s the who. I grew up with horror movies and reading. Back in the 70’s in Philadelphia, it was really easy, we had Creature Double Feature on one channel and Dr. Shock on another, it was almost hard not to get into horror movies then. As far as reading it, that was my Mom, we had a big hardcover of Poe’s “Tales Of Mystery And Imagination” with illustration by Arthur Rackham, I have it now. She’d also read “The Legend Of Sleepy Hollow” every year for Halloween before bedtime. As far as the who set me writing specifically, I liked writers who really pushed the envelope on what the language was capable of doing, or who really wanted to make you think about their work, Kerouac, Camus, Zelazny. Emotions fade, but being forced to think about it drags you in deeper if you’re willing to go with it. Back to top >>>

Paul Lubaczewski: Well, I’m a lifelong insomniac, you need to think about something while you’re lying there trying to sleep. I usually have the majority of the outline in my head before I even turn on Open Office in the morning. Unless it’s a novel, that starts with maybe the first couple of chapters in my head, after that, it gets very, “Lady if it’s any consolation, I didn’t know it was going to happen either.” I let it surprise me. At some point, you learn where it ends, long before you’ve written it down, but until then, your guess is as good as mine.
Back to top >>>

Paul Lubaczewski:Try to get everything done around the house, life finished, so I can write uninterrupted. I’m usually writing right up until I go to bed, and keep a notepad next to the bed, “just in case”. Back to top >>> 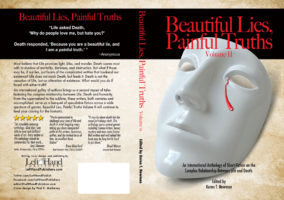 Paul Lubaczewski: I’m notoriously cheap, so I probably wouldn’t recommend anything I use, unless you like the frustration of course. I wrote my first things when I was a young man on an ancient old typewriter, so even cheap software is better than the old days. Research is massively easier too. Back to top >>>

Paul Lubaczewski: Other than my last name? It doesn’t exactly roll off the tongue, does it? But, pushing the envelope in trying to see what can be done with the genre. I have a lot of respect for the “new wave of Sci-Fi” writers, Zelazny, Ballard, Silverberg, they thought they could write in a genre, and yet write something an English teacher could spend classes on dissecting. That even genre pieces could be art, with high literature components to it. That’s the rub though, nobody really enjoys having their version of fantasy mucked about all that much, Pratchett said it very well in one of his books, “what people think they want is news, but what they really crave is olds”. So if you decide you’re going to play outside the rules, well nobody who makes the rules is going to shout, “Hurrah” for you for a while, until they get what you’re on about. Back to top >>>

LHP: How much time is spent on “the business of writing”, queries, seeking an agent or publisher, marketing/sales?

Paul Lubaczewski: More than I’d want. Less than it used to be. Being your own agent is the worst part of the gig, and it’s also the part your creative writing teacher in High School doesn’t mention. It’s time-consuming, hunting down who has open calls, etc. At any given moment I have four different sets of listings pages bookmarked. You also have to keep track of your stories, publishers fold, and trust me, they will not contact you if they do. Back to top >>>

Paul Lubaczewski: I do a bit of both, I’m working on a novel now, but I like banging out shorts for the immediate satisfaction. Not to mention, horror tends to work best in the short story format. It’s hard to drag suspense out for 300 pages, you end up needing to fill it with other styles. Notice, most of the guys who do full lengths put in other elements into them. Barker drops a heavy dollop of noir gumshoe, Lumley started by adding Bond thriller, but changed it to fantasy elements, Moore is now considered more comedy than horror, etc. All of the real “we can’t get away from them classics” like LeFenu, Poe, Lovecraft, went with the short story venue for a large chunk of their work. Even the famous novels like Dracula was written as “invasion literature”, and LeFenu’s Carmilla, and Shelley’s “Frankenstein” are at best short novels. At 51,000 words Mary would struggle to find a publisher now. Even King has started shrinking the word count in recent years, “Cell”, which was an amazingly tight book, once upon a time that would have been “Part 1” for him.
Back to top >>>

Paul Lubaczewski: Regret and resentment, those are really the two themes. I’ve always been fascinated with the dynamic of old versus young. Even in a youth culture, you can be an “old timer” by the time you’re twenty-five.
As far as the regrets, anyone who has really gone for it in anything, in anything, has all kinds of regrets, all kinds of prices that need to be paid. To do anything, is to start collecting mistakes that can keep you up at night.
It’s the main driver of all the resentment the old have had towards the young as long as the world has been. All those mistakes they have to make for themselves, that even though you made them yourself, seem stupid and avoidable now. The young and vigorous body to make them with, while you cruise through life in a broken down wreck. A line from “It’s A Wonderful Life” that has always cracked me up, “Aw youth is wasted on the wrong people!” The concept of eternal youth and all the products associated with trying to achieve it sells for a reason. If only I could have my knowledge and life experience, and never have had to pay the price for it.

Paul Lubaczewski: Patience young Jedi. In everything, lots and lots of it. In your writing, you need it to do things the right way, not just the “get it done” way. To give the bridge scenes that aren’t even interesting to you, but are vital to the plot, to give them life, that takes patience. The business end, the getting your work out there part, that takes immense patience. You not only need to send it out, all spit-shined and polished, but it has to be going to the right publisher. Even if you’re writing “olds” you might not be selling the right type of olds for that editor. Keep sending it out until you hit the right one, go back and look at it again, as you learn and grow, you might see for yourself where it could stand to be improved. Christopher Stasheff, a writer with enormous success went back and completely re-wrote one of his books years later. The thing is, you have to keep getting up every morning to push that boulder up the hill.
Back to top >>>