I recently completed a first novel, and it’s due to be published in January 2018 by a London-based publishing company. I’ve begun the second one now, and thus far it’s far easier going because of these five lessons learned from writing the first one.

I launched into the first novel, full of fire and fun. I had my main characters, I knew roughly what the plot was going to be, and I wanted to get writing. And I immediately ran into problems. My main character is a trainee in a law firm. Where is the law firm physically based? What’s the view out of the window? How many other trainees does he share an office with? These problems immediately presented themselves. And I do mean immediately. Within the first two paragraphs.

With the second novel, I spent a month or two writing up details about the plot, the settings, how I should introduce things. It cost more time at the start, true, and it felt a bit frustrating because all I wanted to do was write, but it has made the writing of the second one (thus far) far easier and smoother. 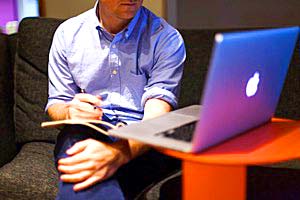 Those main characters I mentioned above? They were pretty rough as well. I mean, I knew what their defining characteristics were. But I didn’t know what their parents did. I didn’t know what their favourite colour was. I had no clue what sports they played as a child. And I had no idea about the multitude of minor characters with whom they would interact, and challenging, arguing and agreeably chatting.
Before starting the second one, I spent a lot more time on characterisation. Barbara Poelle advised authors to “write 20 things that the reader will never know about your character. These will naturally bleed into your writing and provide a richness even though you don’t share the detail.” Never a truer word.

3. Get used to the grind

When I was at the beginning of the first novel, I had a number of scenes in my head. The complicated relationship between my main character and a girl he adored, how the crime happened, the denouement at the end. The drama was ready to write! What was less clear was what my characters were doing when they sat on the train between two cities. Or what the main character actually did at work, in his everyday life. Or what they did when they had an hour alone. Researching the things that needed I needed to research, and writing these ‘inbetween scenes,’ caused a lot of heartache and frustration. They were necessary but seemed pointless.
During the first novel, in rewriting it, I realised that these scenes should be used to develop character and plot further, and planned for them in my second one. I didn’t do it perfectly, with several scenes coming on me unexpectedly, but at least this time I was more ready for them.

4. A thousand cuts… Control thy fire

I assumed, when writing the first novel, that when I was ‘in the flow,’ I should just keep on writing. If it’s coming to you, put it down! And I quickly discovered two things. Firstly, what I was writing generally got poorer. Not necessarily in quality, but regarding driving the plot along, developing characters, and so on. Basically, it began to become irrelevant. The other thing I discovered was that if I wrote 5000 words a day, I wouldn’t write over the next couple of days at all.
For my second novel, I’ve limited myself to a minimum of 1000 and a maximum of 2000 words a day, and so far that’s going pretty well. Every day I wake up keen to write, and I’m confident that what I’ve got in the bank now is useful stuff.
A further note here. I’m not prescribing this limit as the be all and end all for everyone. It’s the limit that works for me, currently. I may well alter it for the third novel.

I recall finishing my first novel. It was a gloriously exciting moment, when I sat back, and looked at the thousands of words that I’d written. Then I went back to reread it, expecting an entertaining, smooth ride. My expectations were frustrated. The plot was tangled, not making sense in some places and outright contradicting itself in others. The characters occasionally did things which were outright bizarre. And things which just wouldn’t happen abounded.
I’ve now realised that what I had looked at wasn’t my finished novel, but my finished first draft. Quite a difference, as I discovered as I spent almost the same amount of time again wrestling with the plot, rewriting scenes and characters to make the plot more realistic and workable. Now, I’m approaching the end of my second novel – or rather, of the first draft of my second novel. I expect that the end of the first draft is the halfway point (although I have hope that given the lessons learned above, rereading, editing, and redrafting will not take quite as much time!)

Such are the lessons I learned from the first time around. Hopefully, they’ll help you as well.

EB Pollock is a new author, with a debut novel, The Importance of Suicide, due to be published in mid-January by a UK publishing company. He was a lawyer for the previous eight and a half years both domestically and internationally but has decided to go in a different direction, with less stress and more creativity. He is currently working as a teacher of English, traveling throughout Europe, taking the holidays and free time to write more books and short stories. He is an avid rugby fan, enjoys learning new languages (Spanish is the current one he is working on), and meeting people because all people have interesting stories to tell. His personal blogs can be found at euanbpollock.com. The Shakin’ Steps blog details the journey of someone who has no experience in the writing or publishing business and what he learns, for any person who has written a book or wants to write a book but has no idea where to start; the Life and Times blog deals with life around us, in particular, the economic inequality of life and how that affects the rest of society. He can also be found on Facebook at euanbpollockauthor, on Twitter with the handle @euanbpollock and on Instagram.